Arcade games predate home consoles, and for the longest time they were superior to their home console ports.  During the early 90's, this ceased to be the case.  "TMNT: Turtles in Time" was considered by many to be better on the SNES than in the arcade, so what was the point of paying quarters to play?

Since the decline of arcades in America, I've noticed a change in the gaming community and development mindsets.  Arcades influenced nearly all games, as their ports to all platforms directly competed with games that weren't suited for arcades.

I miss the old days.  New games can be fun, but they'll never match the charm and appeal of these quarter-eaters. 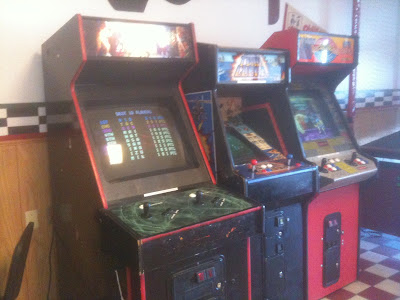 Over the past couple years, I've started a hobby of collecting and refurbishing old Arcade games.  It started with me buying a cheap, banged up "T2: Judgement Day" just so my brother and I could play the authentic arcade version all the way through at least one time without interruption (We almost beat it as kids, but someone unplugged it at the last moment.  The memory has haunted us).  While buying "T2", I also picked up a banged-up "Twin Cobra" and started experimenting with repairing it.

As my collection grew, my hobby turned into a small business idea, and then back into a hobby as I realized how small of a return on investment there would actually be.  It cost about a hundred bucks a month to store these machines where they can't be played.  I'd prefer to gain a hundred bucks every couple months where people can enjoy them, and I can donate that money to charities.

I wish developers would still make games with the arcade mindset.  Maybe they wouldn't depend on DLC so much? Maybe gameplay would take priority over everything else? Maybe games would have that perfectly balanced challenge?  Maybe they'd be playable with little or no instruction?

I want to make arcade versions of most or all of my games, even if only for the novelty of it, and to keep myself in that ideal development mindset.
Posted by Shaolin Dave at 7:23 AM No comments:

After releasing Nightmare House 2, Hen found the trailer and some WIP videos for a similar HL2 mod called "Underhell".  Upon contacting the mod director, MXTHE, he found that the project had been cancelled.  He urged MXTHE to not give up and continue work.

With newfound motivation and support, MXTHE began work again.  I learned of the project through Hen and volunteered my services as well.  I wound up doing a little voice-acting, but almost nothing else. Unlike NH2, I am only one of several voice actors, so it's nice that there's a bit of variety there.  Most of the voice actors are better than me as well, so that's awesome.

I'm still acting in the second installment (chapter 1), and my involvement is still about the same.

The prologue puts you in control of Jake, a S.W.A.T. operative who's wife recently died in an apparent suicide.  The game is split into three parts.  First, you have the house, where you seek for clues as to what was going through your wife's head before her death.  Second, is the fast-paced action sequences in which you and your team fight terrorist as you track them across the city.  Finally, there's Jakes nightmares, which add physics and pattern-based puzzles.

I found myself playing the action sequence and thinking it was rather long for a mod, only to complete it and find out that it was only the prologue.  I wasn't even on the first chapter yet, and last I heard this thing was going to have 6-8 of them.  Not only that, I was only 1/3rd of the way through to prolouge because I hadn't explored the house or nightmares yet.

Chapter 1 is currently in production.  Obviously I will post an update when it is released.

Posted by Shaolin Dave at 2:37 AM No comments: