Nightmare House 2 (2015 version) has been released!

Over the past couple months, I've been working on rerecording most of my lines for this excellent mod.

Today, it's not a mod anymore, it's stand-alone game.  It's been updated to a newer version of the engine, with tons of improvements and fixes.  It's still available for free for anyone who has a Steam account.

Get it here.
Posted by Shaolin Dave at 11:33 PM No comments: 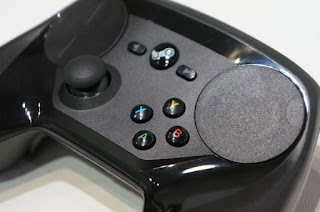 Well, I preordered the Steam Controller and got it in the mail a little bit ago.

I was pretty eager to try this out.  Both as a gamer and as a developer.  A while back I more or less decided that every game I developed for PC/Mac would have this controller in mind, assuming that it will become the new standard for PC/Mac game controls (for console-style games, anyway.  Many game types will still benefit from a keyboard/mouse control scheme).

So, I got it in the mail, installed the batteries, downloaded the pre-day-one firmware patch (that's a good sign, right?) and got started using it.

And... nothing.  Well, not exactly nothing.  It did launch Steam "Big Picture" mode.  It allowed me to navigate my menus, set up profiles, all that stuff.  However, it didn't work with a single game I tried it on.

Broforce was the worst, it seemed like having the controller installed stopped the game from starting entirely.  I wouldn't blame that on the controller, though.  I had the same issue trying to play with my Playstation4 controller before.  Yes it was a little worse with the Steam Controller (disconnecting the PS4 controller, starting the game then reconnecting fixes that issue but not with the Steam Controller), but I still chalked that up to an issue that the game developer needs to iron out.

So I tried Volgarr the Viking.  Cave Story+. Nothing.

I searched online and found that pretty much every Mac user, and lots of PC users, were having the same issue.  A couple hours later I get an email from Valve that revealed they goofed up the Mac version and would be giving me the Valve Complete Pack to make up for it.  Not bad (except I already owned nearly everything in that pack), at least they acknowledged their mistake and tried to make up for it.

They said it would take a couple weeks to fix the issue. Last night I found that it was partially fixed and was able to play the first two levels of Volgarr with it.

The shape of the controller is a little weird.  Holding it in my hand, I'm immediately reminded of the original xBox controller (and I'm talking about the original original controller), it's not quite as bad but still pretty close.

The controller uses two AA batteries (included).  I think that built-in rechargeables would have been very doable, and convent.

It comes with a USB dongle for wireless play, or you can plug it in with USB for wired play (I tried this once just to see if it would work differently that wireless, no different).  The dongle is your normal tiny, easy-to-lose style.  I would have liked a compartment on the controller to storage, like my Logitech bluetooth headset.

Speaking of bluetooth, it's pretty much become the wireless controller standard nowadays.  My iMac (like all) has built-in bluetooth, as does my laptop, and many other computers.  I assume that Steam will release a bluetooth version eventually, but I'm really wondering why they just didn't start out with one.  A bluetooth USB dongle would have been fine for those without built-in bluetooth.

Were the standard is deviated from is the two touchpads.  There is no d-pad, but the right touchpad is advertised to work as one.  Spoiler alert: it doesn't.  I haven't had a chance to play and FPSs with this yet, which is apparently what the dual-touchpad are intended for, but from the feel of it so far I'll probably be sticking with keyboard/mouse for those.

So, about the actual functionality...

The left trackpad d-pad, well, it worked but was so finicky I had to give up on it after about ten minutes and switch to the joystick.  It just wasn't nearly precise enough, sometimes not registering my movements, or sending me in an entirely different direction.

The joystick was better by leaps and bounds, but using a joystick on a game design for d-pad or keypad input does come with little quirks.  Still, I got used to it relatively quickly.  Occasionally it would register a down movement out of nowhere, so I'd roll instead of jump or smash through the spears I was trying to stand on, but this only happened a few times.

The right-side trackpad was mapped to the action buttons, and it just didn't work.  It was awkward to use to begin with, but even pushing the buttons correctly sometimes didn't register anything at all, or sometimes the wrong button.  So, I wound up using the joystick/buttons and ignoring the trackpads entirely, at least for this game.

I have a feeling that's what I'll have to to with about 90% of the games I use this on, and I play a lot of retro-styled games that would best benefit from a gamepad.  Seeing that these inputs are crammed into the bottom of the controller over the much-more prevalent dual trackpads, it might get a little uncomfortable.

So, I beat the first level of Volgarr last night and the second level today.  I already played through these parts of the game, though it has been a very long time (over a year ago I think?).  Still, it was barely more difficult to play with the Steam Controller than it was to play with my X-Arcade Solo.

So is it worth getting?  Well, time will tell.  I'll give Steam a little more time to iron out their bugs and game developers a little more time to make software that complements the design.  In the meantime, I'd say that if you're into the same games as me then you're better off with the X-Arcade or Playstation/Xbox controllers, depending on what your computer/games support. Hopefully a standard controller with Steam will at least influence developers into giving all their games native gamepad support.

Posted by Shaolin Dave at 6:21 PM No comments: